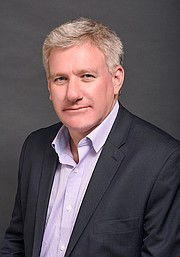 Top executive said the cost of electricity in Grand Bahama is the third-lowest in the Caribbean region but agrees that it could be lower.

“I would be the first to say the price is not low enough,” said Dave McGregor, president and CEO of GBPC. We need to accelerate the transition to renewable energy to really start pushing down the price.”

Mr McGregor indicated that the Power Company is moving toward transformation to renewable energy and is talking to at least four independent power producers about a solar plant for Grand Bahama.

The Power executive – at the Rotary of Club of Grand Bahama Zoom meeting last Saturday – also indicated that they are looking for a new suitable site for its 5 megawatt Solar Sun Project, which was stopped after the initial site was severely flooded during Dorian in early September.

GBPC had started work on the project on land, near its West Sunrise Highway plant, in 2019.

“We actually contracted that, and we actually started work,” Mr McGregor said. “Hurricane Dorian came with apocalyptic flooding at the site where we were going to build solar; it flooded half the site, so we stopped that project and are trying to find another site; we are trying to find some land that is unencumbered and not susceptible to flooding.”

There has been much ongoing criticism and public debate over the high cost of energy in Grand Bahama. Last week, a group of concerned residents protested in front of the GBPC headquarters.

And two local civic organizations, the Coalition for Concerned Citizens and Families for Justice, also spoke out against a storm recovery and stabilization (SRS) charge that the company is expected to put in effect on October 1. The organizations stressed that the cost of electricity is already too high and that the island’s economy, consumers, and businesses cannot afford any further additional charge on their energy bills. The CCC has planned a town meeting later this month to discuss SRS charge.

In his address on Saturday, Mr McGregor noted that the Power company suffered significant damage during Dorian to the tune of some $45m at its Peel Street plant.

“What we do with the stabilisation charge is trying to payoff Dorian,” he explained. Those costs need to be recouped somehow.”

“There are several ways we could do it, build it into the electricity rates every year that we feel we could be fair to customers because you will be paying then for hurricane restorations. Another way is to hedge the price more. It is appropriate to do it when you are using heavy fuel oil,” he said, noting that they did that with Matthew which caused some $27m in damage to GBPC.

“We ought to use that until 2025 to hold the price of power stable so businesses, in particular, can plan their costs over the next few years with some stability. We all want energy cost to be lower but holding them stable has also helped.”

McGregor said that the all-in price of electricity has not changed since 2012, a claim which CCC said is not correct. Pastor Eddie Victor, the convener of CCC, claimed that a rate increase was approved in 2015.

“The price of electricity has not gone up in nine years, McGregor said.

The Power executive also noted that 75 percent of its customers’ bills are less than $200 in average months, excluding July and August.

“If your bill is higher than $200 you are in the top 25 percent (high usage) electricity on our island.”

“And what I found working with Barbados and Dominica, I was actually quite shocked when I came to GB looking at the electricity usage per capita. People in GB, and indeed people in The Bahamas, use about three times as much electricity as they do in Dominica, and twice as much as in Barbados.

“So I think we have some work to do at the GBPC, and you have work to do as residents and customers to help manage energy cost because we are using three times as much as our neighbours, So that is going to be a major focus of us,” he said.

Despite this, however, he contends that GB compares favorably with the rest of the Caribbean, at the bottom third lowest in the Caribbean in terms of electricity costs.

“It might not feel like this because we had some high billing months in July, but our rates at 10 cents fuel surcharge and 19 to 20 cents base charge, is about the third or fourth lowest in the Caribbean,” he stated, adding that the “fuel hedging strategy has paid off.”

He noted that Trinidad and Tobago is first, and Jamaica is next due to its transition to renewable energy and spreading energy cost among the millions of consumers there.

Mr McGregor – who has been in the Caribbean for eight years in the energy industry – has been sent by EMERA to commence renewable energy transformation in GB.

He noted that there have been a couple of false starts, referring to Hurricanes Matthew and Dorian, which caused $27m and $45m, respectively, in damage at its main generation Peet Street plant, which uses fossil fuels.

“Renewable energy is the future for this island, he stated. We need to get off expensive imported fossil foreign fuel, and the way to do that is to introduce reliable energy. Solar is the one that works best here, but we are also looking at wind, and with some other local partners to look at tidal options as well.”

There are at least four parties who are interested in building solar plants and selling their energy to GBPC. McGregor confirmed that all the parties are Bahamians, some with foreign interest, but would not disclose those groups because of a non-disclosure agreement.

He stressed that it is really important that the cost of that solar energy is lower than the cost of energy today. “We really want more people paying less for electricity, not fewer people paying more,” he said.

Mr McGregor stated that EMERA had implemented a three-point plan after acquiring GBPC: to improve reliability, reduce and stabilize energy cost; and transformation to renewable energy.

They are now in the third step of that plan, he said, and while still trying to reduce and stabilize energy cost and improving reliability.

The new $85m plant, he said, has tremendously increased generation reliability, and the investment of $15m on a storm hardening programme to reduce outages caused by hurricanes and thunderstorms, and an automatic reclosure system against lightning strikes. Secondly, their fuel hedging programme established in 2016, has also allowed them to lock in the price of heavy fuel oil at $42 per barrel until 2021/22, reducing the fuel surcharge to customers from 20 cents to 10 cents, since 2016 and until 2021/22.

“Along with Barbados, GB is today one of the more reliable power systems in the Caribbean,” McGregor said, adding that it has a 99 percent reliability rating by CARILEC and international standards.